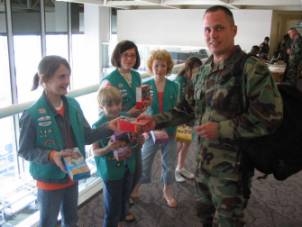 On Monday, twenty-nine volunteers with the Armed Forces Service Center (AFSC) welcomed 293 army reservists from North Carolina to the AFSC. The Girl Scout Council of Greater Minneapolis (Troops 1408, 2612 and 2614) also assisted by handing out boxes of cookies to arriving soldiers. After staging AFSC throughout the day, the soldiers boarded buses to Ft. McCoy The 108th Division will deploy to Iraq, after a brief stay in Wisconsin.

A special thanks to Sprint, for sending enough cellular phones to accommodate the group. The soldiers greatly appreciated the opportunity to call home. A heartfelt “thank you” goes out to everyone that assisted in extending a ‘Minnesota Nice’ welcome and send off; the AFSC volunteers, Airport Director’s Office, MAC Landside office, Airport Police, Keys Cafe and the Girl Scouts Council of America.